How to Become the Change Leader Your Company Needs

How HR, Business, and City Leaders Can Transform the Health and Wellness of Their Comunities 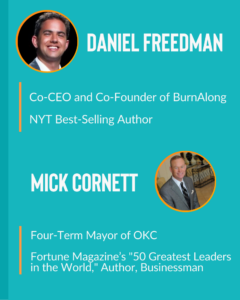 With the pandemic, talent shortage, high attrition rates, and a steady stream of unknowns, organizations need change leaders now, more than ever. Discover key lessons to inspire change from Mayor Mick Cornett whose success has led companies and cities around the world – plus Michelle Obama and Ellen DeGeneres – to turn to him for guidance and inspiration in prompting change while transforming cultures and mindsets.

This is the moment for HR, business, and government leaders to step in, innovate, and re-write the future of work.

But how do you transform culture? How do you capture, and sustain, engagement from your workforces? What are ways that you can unify your employees behind a common goal or metric to really drive change at your organization?

In 2007, Mayor Mick Cornett was asking similar questions. His answers to these questions lead him to put Oklahoma City on a diet after it appeared on a list of the most obese cities in the U.S. As a change leader, he understood that to make his city a great place to work and live, it had to become healthier too. The campaign was a success, with OKC dropping a collective million pounds in four years.

That success has led companies and cities around the world – plus Michelle Obama, Oprah, and Ellen DeGeneres – to turn to Mayor Cornett for guidance and inspiration in prompting change while transforming cultures and mindsets. The lessons are needed more today than ever before as companies face unprecedented challenges and unknowns in the coming months.

Join Mick Cornett, four-term mayor of Oklahoma City and one of Fortune Magazine’s “50 Greatest Leaders in the World” in conversation with Daniel Freedman, Co-CEO of Burnalong and NYT best-selling author, to learn:

Mick Cornett is a former TV personality, businessman, and 4-Term Mayor of Oklahoma City. Cornett is best known for helping to bring an NBA franchise to Oklahoma City and for addressing the community’s shortcomings in areas of health and wellness. His leadership to pass the transformational MAPS 3 initiative has spurred an enormous amount of private investment into the city. In 2018, he was named to Fortune Magazine’s list of the The 50 Greatest Leaders in the World. Newsweek called him one of The 5 Most Innovative Mayors in America. The European-based World Mayor Organization named him the second-best Mayor in the World. And Governing Magazine proclaimed him a Public Official of the Year. He was the President of the United States Conference of Mayors in 2016-17. His latest book “The Next American City” was published by Penguin/Random House.
Daniel Freedman is the Co-CEO of Burnalong (www.burnalong.com), an online video and social motivation platform that works with companies, cities, universities, hospitals, and insurers. He is a former columnist for Forbes and began his career at the Wall Street Journal. He is the co-author of the award-winning, NYT top-10 bestseller, “The Black Banners: The Inside Story of 9/11 and the War Against al-Qaeda.” Daniel previously held senior roles at the United Nations, intelligence consultancy TSG, Apploi, and the U.S. Senate. He also co-founded CyecureBox, a counter-espionage product.
complete the form to register

We are a deeply mission-driven company.

Our mission is to change lives by giving people the health and wellbeing programming and support they need.

We do this by working with employers, insurers & brokers across the US and in more than 70 countries, and partnering with 1,000’s of wellness professionals, to meet people and their families where they are. We provide the online health and wellbeing programming and social support they need to achieve their goals.

What Makes Burnalong So Great?

Thousands of live and on-demand classes and wellness programs.

Machine Learning tailors the experience to each individual.

Up to 4 free family sub-accounts included with every corporate subscription.

Trackable wellness habits help to achieve your wellness goals directly in the app.

Want to Get Started?

Employers of All Sizes are Seeing 5x Engagement on Burnalong.